I’ll admit a secret: I rooted for the Avengers during the Marvel event Avengers vs. X-Men.  In the past, my appreciation for the X-Men tends to be far less reliable and deep than my adoration for Captain America and his gang of misfits.  But with this website, I’ve had to read hundreds of issues of series, characters, and teams I never experienced before.  It’s awesome, you should try it.  Through my “research,” I’m now totally on board with America’s favorite mutants.  The depth, complexity, and long-lasting cultural impact of the X-Men and their stories have been sorely missing in my life.  A hole in my heart repaired itself as I delved into the enormous backlog of X-Men adventures.  But enough about me.  Let’s talk about Quicksilver.

Debuting in X-Men #4 back in 1964, written by Stan Lee and drawn by Jack Kirby, Pietro Maximoff (Quicksilver) and his sister Wanda (Scarlet…

Tony Stark’s flamboyant personality makes him the natural spokesman of well, everything.  Sure, Captain America knows how to make the riveting pre-battle speeches, but who speaks for superheroes when they’re at a press conference or plain ol’ meeting?  That’s where Iron Man flies in.

Let’s take a look at three Stark speeches, two from Avengers Disassembled (written by Brian Michael Bendis) and one from World War Hulk (written by Greg Pak).  Get ready for a ton of word bubbles. Oh, and a bunch of spoilers.

So after a whole bunch of awful stuff happening within the span of a few issues (Avengers dying, mansions blowing up, jets crashing, etc.), the Avengers decide to disband.  I’m sad also. 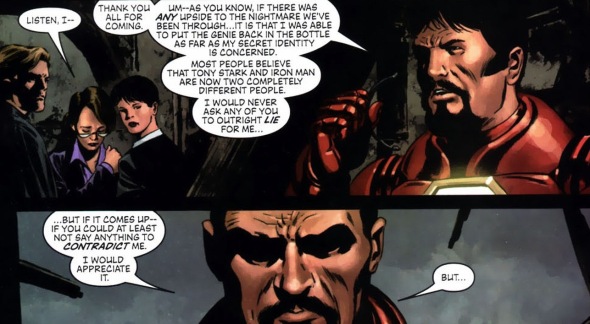 The man has to take care of business first.  But why is he distancing himself from the armor?  That’s the second speech.  Though he should probably just wear…

It’s time for Serval to announce the All-New X-Factor to the world. What will go amiss? Read my review of issue #12 and find out!

It starts with Havok meeting with his spy, Quicksilver, in a downtown bar. After his report, Havok tells him to come back to the Avengers, but he feels Polaris still needs him. Havok tries to pull rank, but Quicksilver up and quits the Avengers because he didn’t want to be another power-set like the sell-out that Havok was. This alone earned my respect for Quicksilver.

We then skip to Danger questioning why she has to wear a uniform, before she encounters Warlock. He tells her she looks nice and she notes he changed his speech pattern, despite it being hard for him, because he thought it would impress her. He got a kiss on the cheek for it, so good for him.

With Gambit, he goes to confront Harrison Snow about being left to die. The man is so damn smooth with pretending that being with his wife didn’t bother him that Gambit is confused. If it weren’t for the evil eyes at the end you might even believe him.

Things aren’t as smooth for Doug, who is trying to comfort Georgina after losing all her parents and home because of him, technically. He offers her the chance to slap him if it would make her feel better, which she does so hard it hurts her hand, but it doesn’t make her feel better in the slightest. She then apologies and thanks him for everything he’s done regardless before he leaves for the press conference.

Cut to the conference, where Quicksilver asks a final time if the PR lady, Linda, wants to do this because it’s waving a flag for villains to come and attack them. She points out it has happened a few times now and they were fine. The press conference is derailed when Fatale calls Quicksilver out on his actions in Son of M, which he owns up to live and on camera, before leaving for his room.

There, hours later, when he expected Captain America or someone to come and take him in, his daughter Luna shows up. Now, because of Son of M and that Quicksilver claimed that a Skrull did it in preparation for Secret Invasion, she was ashamed of him and told him she would love him because he was her father, but she would never forgive him and would always be ashamed of him. Since she was watching the press conference and saw him admit the truth, she forgives him and they hug as the comic ends.

This was not an action piece, but I loved it all the same as it served as development for Quicksilver. He owned up to a mistake (granted most of the other Inhumans are too busy with the Inhumanity event to bother him about it now) and earned his daughter’s respect again after years later our time and like one in theirs. He’ll probably get arrested, but I like him more than I did before this series and when he was working with the sell-out.

It’s time to put an end to the MGH hunt in Magneto #8. Read my review of how he does so with surprisingly little bloodshed.

The comic begins with our useless agents of SHIELD coming to the site of where the Predator X remains are. Turns out they’ve managed to piece together what happened pretty well and they even manage to get a computer that the master of magnetism trashed working again. Because of this they claim they know exactly where he’s heading.

Magneto himself is venturing into a ghost town, noting that like any living thing it can die. But it’s in this town where the ones who’ve earned his ire are holed up and making MGH. The men shoot up instantly with the stuff when he walks through the front door and gain powers, but he claims he only wants to talk. They don’t believe him, which is smart, but rather than simply ganging up on him they reveal they admire mutants and don’t hurt them since the ones they get are already dead.

He wants it to stop, but it’s a very good business and he doesn’t think that Mags can take them down because he’s lost his powers. Mags knows he’s goading him, but he’s also right. Still, he notes that the difference between someone who’s a real mutant and a MGH-user is that they haven’t been persecuted and think they’re immortal just as SHIELD busts in and starts shooting with rounds meant to kill Mags, who he notes only shoot because they look like mutants at the time.

The head of the operation tries to run with his cook, but Magneto puts a stop to that. The useless agents chasing him tells him to stand down, but he rightfully points out that if they did a better job of stopping this crap he wouldn’t need to keep doing what he’s doing. The agent ignores him and thinks he’s just a feeble old man hurting people to make himself relevant.

Magneto promptly states she doesn’t understand him and he doesn’t answer to her, before escaping with the MGH cook. He takes the cook to a lab that his new friend bought and tells him to perfect the MGH formula so he can regain all his lost powers as the comic ends.

What can I say, Mags is a man with more than one goal and this time he only personally killed one person. It’s clear he pretty much set it up so SHIELD would do the dirty work for him, and he got what he wanted without having to strain himself. That’s a master planner for you, folks.

The air was a little off at the end, but other than that it was a solid issue at 5 out of 5.