Ah, alternate universe versions….what problems don’t they cause and solutions they present? 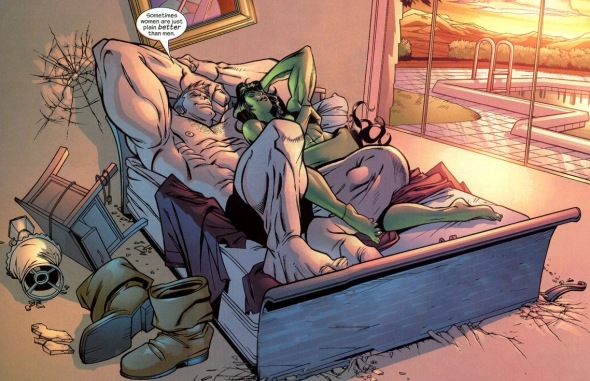 And this single panel has sparked years of controversy, lots of retcons, and enormous amounts of jokes.  I’ll explain in a bit.

Jennifer Walters, also known as She-Hulk, happens to be Bruce Banner’s (the Hulk) cousin.  During a mafia-related attack, Walters gets shot and the only compatible blood donor is her big, green cousin. Also, it allowed her to turn into an angry Hulk and thus her adventures began.

Cain Marko, the stepbrother of Professor X, finds a secret temple of the mystical Cyttorak, who gives Marko his Juggernaut powers.  He was a lackey of Magneto’s Brotherhood of Evil, and not really much of a finely-tuned mind.  I’m saying he’s dumb.  With his supervillain history, his lack of charm, and his absence of respect in the Marvel universe, you can imagine that readers weren’t…

This entry was posted on April 26, 2014 by Born of Prayers. It was filed under Uncategorized .