Avengers Undercover continues where it left off in the second issue and I’m going to give you my biased opinion as I review it.

The issue opens with the group floating above the entrance to Bagalia and Chase having second thoughts. These thoughts are made more vocal as they go down the rabbit hole and into an underground city. When they get spotted by a bunch of D-rank teen villains, naturally, fighting ensues.

During this little skirmish Nico and Chase argue about the fact that he claims to be there because he considers Nico family and needs him, while she claims he came because she made him despite being the “less” broken of the group and not out of loyalty. It hurts me seeing this because after everything they went through in their own series they’ve gone back to not trusting each other. The rest of the group deals with their enemies in short order, with Death Locket finishing things with her gun arm. As they leave, two of the Masters of Evil muse on their skills and decide they want them.

The group traces Cullen to a club and Anachronism breaks in to rescue him, only to come face-to-face with at least a hundred villains. Luckily Cullen diffuses the situation and explains that he isn’t there against his will. He’s there because they accept him for how he is, no shame or fear or pity.

Hazmat drags Anachronism onto the dance floor and tries to comfort him, stating they need to blend in and stay there as long as it takes to bring him back. Chase runs into two hot women who play paper-scissors-rock for him and decides to chat them up, while Nico tries to convince Cullen they should go back and fails since he states that he’s “a cold-blooded weapons expert who hates people and periodically transforms into a ten ton indestructible man-eating soul beast” and he was always going to be a villain.

The son of Satan, Daimon Hellstrom, notes that Nico is trying so hard to turn him because she feels shame for trying to kill him near the end of Arcade’s Murderworld and states no one is forcing him into trouble. So that means he destroy that SHIELD outpost on his own accord, which is equally worrying. Daimon also shows he’s been helping Cullen control his soul beast and he offers to help teach her a thing or two about black magic without following in any footsteps. Even Death Locket is being charmed by Excavator, who I recall Molly Hayes of the Runaways knocked him sensesless during the beginning of their second series.

In the end only Cammi remains untempted by the offering of the villains and drags them all out four hours later, shaming them by stating she didn’t leave her mom home alone to chaperone them and that they’re going home. Needless to say Masque and Constrictor love her spunk when she tears Cullen a new one afterward, but Cullen has Daimon transport them all to where Arcade’s ass is as the comic ends. Vengeance is coming.

I loved it, plain and simple. I was expecting the group to go in and get their asses kicked and coerced into joining the villains, but then we see all this chemistry between them and wonder if they might actually fit in better. I mean, let’s face it, you can’t blame the villains for wanting these guys.

Have you seen what they can do? Nico works with black magic, Cullen has a monster form, Death Locket has nanotech that forms weaponry, Hazmat is a poisonous person who learns to make anti-matter in the future, Anachronism is your muscle guy, Cammi is just badass, Chase…well, he’s a good driver and has those gloves I suppose. They were all villains in the making if things took a really bad turn, so it makes sense they fit in.

That being said, I feel that Chase being a flirt is in poor taste considering what happened to Gert and how he damn near committed suicide. Last time I checked he was still grieving. And where the Hell is Old Lace? Not to mention both he and Nico turned against their parents for being villains, so this is a step backwards.

Leaving aside those issues though, I found this to be a perfect issue and give it a solid 5 out of 5.

All New Ultimates has arrived, the series that takes the teen heroes from the Ultimates line and makes them into a unit of ass-kicking vigilantes. Here’s hoping they aren’t as dysfunctional as their predecessors as I review the first issue.

Our story begins with a group shot as they discuss their units name shortly after the end of the Cataclysm: Survive and, immediately after, we go to Hell’s Kitchen in the morning. This place is a nightmare in the regular continuity, so it should come as no surprise Ganke Lee is promptly mugged by some gangbangers with superpowers until Cloak and Dagger pop up to save him. It seems like they’ve been doing this for a bit since this is the third time this week they’ve had to kick ass and take names according to them. They try to get him to go to a hospital, but he declines so they take him to their home.

Like their counterparts they reside in an abandoned church and are soon joined by Miles, the new Spider-man, since Ganke is his BFF (their caption, not mine). It turns out Ganke came to get some Legos, which leads me to think that his obsession is unhealthy, but Miles claims not to judge so why should I? Anyway, they leave as we skip to the Lower East Side, where some cops have busted into a Poor Man’s Roxxon-lab only to find a half-melted corpse as the two suspects have run away.

Back in the Church Lana has arrived after talking to her parole officer and immediately bags on Cloak and Dagger’s home and they exchange phone numbers using SHIELD tech since the organization has been scrapped for failing to stop Galactus. Then they get down to business. Since Roxxon was no longer under SHIELD’s protection, for the reasons listed above, a local gang seized one of their labs and has been giving out what amounts to untested Mutant Growth Hormone. Naturally this ends with a high rate of fatalities and they want to resolve this. So they go the vigilante route, although I think Lana’s parole officer might have something to say about that.

In Chelsea Kitty Pryde is staying in Jessica’s place. She’s having second thoughts about everything. First she was hated as the leader of the mutants, now everyone loves her for punching out Galactus while hopped up on Giant Man Serum until Thor tossed his ass into the Negative Zone. She doesn’t want to be in the spotlight and doesn’t want to go back to Utopia for some reason, so she crashes with Jessica who asks her for a haircut.

Lana makes it to her government housing just as the two suspects from the lab, Stone and Styx, try to break into an old Roxxon outpost. The Serpent Skulls are already there and Lana hears the resulting squabble and gets her new team involved…and gets their butts kicked by Styx and Stone until the cops show up and decide to try and arrest them all. So it’s back to people getting ready to shoot at Miles already.

Things go pear shape as Styx melts the skin off one of the cops trying to get Miles and the other cop shoots him dead. Then the Serpent Skulls pop out of the lab intent on beating the hell out of everyone without a tattoo. The comic ends with the leader of the game, Diamondback, telling them to get started.

I’ve got to say this isn’t exactly a strong start for their new series. Leaving aside the artwork being inferior to the Ultimate Comics Spider-Man and the characters looking awkward at time, some of their dialogue seems out of character and there seems to be some continuity errors.

For example, Poey was the nickname of Lana’s boyfriend, Sid. He was crushed to death in Cataclysm by a random car to spur her into the hero scene. Now, while I’m all for retconning that meaningless death, I need some sign prior to this that he made it.

Then Jessica’s combat abilities seem to have been downplayed. Let’s be frank, she has training and Spider-Sense (and it’s not the weak version Miles has). She shouldn’t get hit by someone without super powers or extreme circumstances like war.

All in all, I can’t give this more than a 3 out of 5 and hope they do better next issue.

I’ll miss Doc too, but he completely ruined all the trust Spidey built up during things like this.

Well, Serpent Thing.  Remember a few years ago during Fear Itself when the Serpent sent those seven evil Thor hammers crashing into Earth and gave seven superheroes/supervillains crazy Thor powers?  Me too.  I loved that event.  Poor Ben Grimm happened across one of those hammers, touched it, and became a bad guy for a few issues.  Plus, the dude — who already is roughly ten times as strong as Spider-Man — now possesses a magic weapon that would crush dear Spidey’s skull into Spidey goo with one well-placed shot.  So, it’s going to be a tough fight today for our protagonist in Fear Itself: Spider-Man #3, written by Chris Yost and drawn by Mike McKone.

With near impossible odds of victory just when we compare Spider-Man’s abilities to Serpent Thing’s alone, there’s one more serious danger added to the mix: 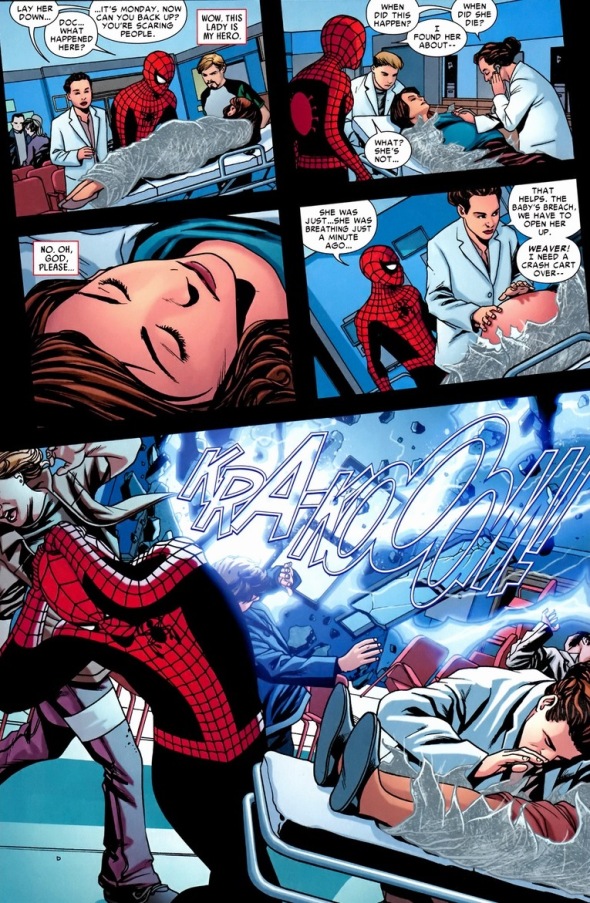 Yes, my friends, he has to stop the unstoppable…