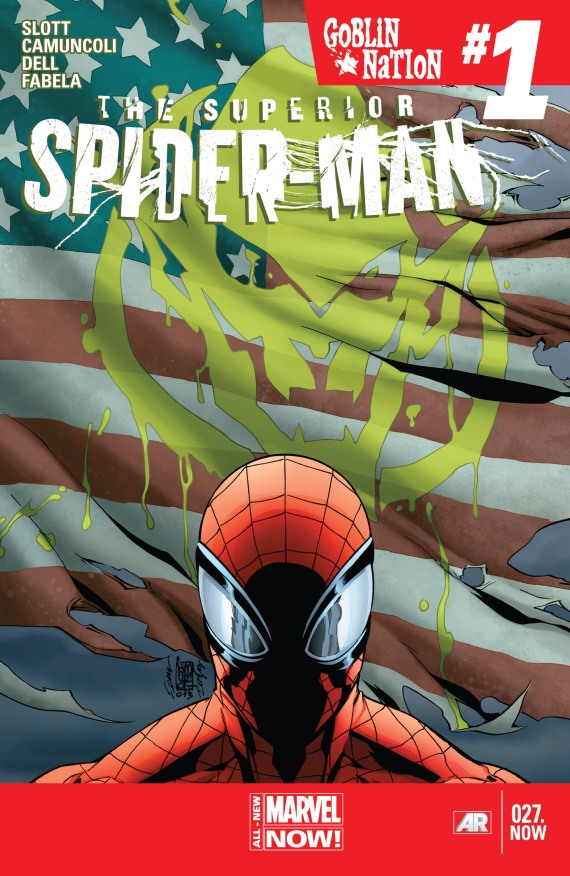 Okay, we are at the climatic arc of Otto’s time as Spider-Man as the Goblin Nation kicks off with a bang rather than a whimper and here’s hoping I’ll be able to review it all the way to the end. So, let’s get to my review of Superior Spider-Man #27.

We start 31 days after Otto quit the Avengers, where he is watching as Goblins rampage over the city with him questioning why his drones aren’t picking up on anything. He quickly realizes that the Green Goblin is behind it, and goes to look for all information related to him inside his mindscape. Ghost Peter is there, hiding amongst the thirty-one memories that remained after Otto dumped the rest and wondering how he’s going to reclaim his body. Again, I would like to point out that once he does get his body back there is so much of who he was missing he’s going to be effectively an amnesiac.

Unfortunately for Ghost Peter, he stupidly ventured into Otto’s memories again (having forgotten he did that once before) and ends up as part of them and most likely will be out of commission until near the end. At the same time, Otto is looking over his Spider-Bot to figure out what’s wrong with them when his girlfriend walks in and points out that he’s been skipping work and forgetting to eat. He thanks her and tells her he’s been thinking of making her a partner, with a panel revealing a wedding ring box in his pocket.

And here’s one of my biggest gripes once Peter comes back. This romance, this heartwarming romance between a woman who has fallen for Otto (in Peter’s body, granted), will end in a tragedy. I blame Otto, I truly do, but all I can do is pray she doesn’t get the Gwen Stacy treatment with the Green Goblin running around.

Speaking of which, after Anna gives Otto his eureka moment with the face recognition software being the problem, we see on the television reporters hounding Jameson with questions to if the Green Goblin and Spider-Man are working together since he got rid of all the competition. Jameson denies it but takes a little trip to Alchemax to visit that little bastard Stone and Spider-Man 2099, Miguel O’Hara, to get his Spider-Slayers since he believes they are working together and Spider-Man must die. And he wants him to know it was him who was responsible.

Yeah, that’s going to end badly for everyone involved.

Spider-Man pays a little visit the guy who made the facial recognition software since he’s avoiding Otto as Peter and he learns about the Goblin Protocol and where the Goblin’s army can be found. So he goes underground to pay them a visit as Captain Watanabe pays Parker Industries a visit, as she wants him for questioning just as much as the rest of his employees. The Green Goblin is waiting and has him sit down for a little chat, revealing he knows he’s Otto wearing his skin by reading Carlie’s Journal.

Otto actually sits and listens to his proposal for an alliance to rule the city…right up until he said Otto was his second. When you have an ego as big as Otto’s, that gets you enraged and he declares himself Spider-Man and that he was going to rid the city of him. Green Goblin tries to fry him with lightning at that, but he reveals that it was the virtual projection made from the tech that Stunner used as he wasn’t stupid enough to go into enemy grounds on his own when he has an army and a brain.

Green Goblin then points out that he was still stupid enough to make his base of operations public and calls for his goblins to destroy Spider-Island, ending the issue.

Well, there was a lot going on in this issue and I must say I’m liking the intro into the final arc. The art was good, the plot was moving, overall it’s a must-have issue and gets a perfect 5 out of 5.

This entry was posted on February 13, 2014 by Born of Prayers. It was filed under Review and was tagged with Free, review, spider-man, superhero, Superior Spider-Man.