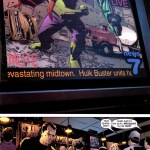 I’m honestly surprised the bet didn’t end with some punches being thrown given the number of shady characters. If Electro knows how the Spider fights, you would think he would do better against him.

If we consistently drop everything to follow a car chase every time it appears on TV, how can civilians in the superhero world ever get anything accomplished with all the daily battles?  In New York City, with the combined rogue galleries of dozens of superheroes and superhero teams patrolling the city, I figure there must be at least two or three supervillains attacks a day.  So all the normal folks, probably to ease some of the pain of living in a spandex-filled war zone, hope to gain some benefit from all this destructive world-saving.  Y’know, a benefit besides not having Galactus eat the planet.

In the fantastic first half Spider-Man: Unlimited #11, written by Brian Reed and drawn by Michael Lark, our setting never ventures outside the bar: 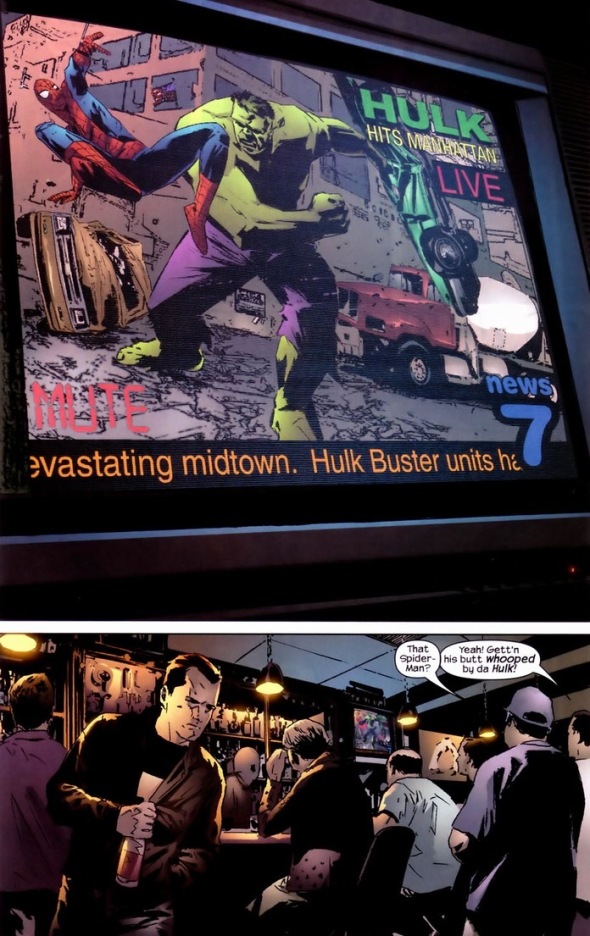 Okay, we are at the climatic arc of Otto’s time as Spider-Man as the Goblin Nation kicks off with a bang rather than a whimper and here’s hoping I’ll be able to review it all the way to the end. So, let’s get to my review of Superior Spider-Man #27.

We start 31 days after Otto quit the Avengers, where he is watching as Goblins rampage over the city with him questioning why his drones aren’t picking up on anything. He quickly realizes that the Green Goblin is behind it, and goes to look for all information related to him inside his mindscape. Ghost Peter is there, hiding amongst the thirty-one memories that remained after Otto dumped the rest and wondering how he’s going to reclaim his body. Again, I would like to point out that once he does get his body back there is so much of who he was missing he’s going to be effectively an amnesiac.

Unfortunately for Ghost Peter, he stupidly ventured into Otto’s memories again (having forgotten he did that once before) and ends up as part of them and most likely will be out of commission until near the end. At the same time, Otto is looking over his Spider-Bot to figure out what’s wrong with them when his girlfriend walks in and points out that he’s been skipping work and forgetting to eat. He thanks her and tells her he’s been thinking of making her a partner, with a panel revealing a wedding ring box in his pocket.

And here’s one of my biggest gripes once Peter comes back. This romance, this heartwarming romance between a woman who has fallen for Otto (in Peter’s body, granted), will end in a tragedy. I blame Otto, I truly do, but all I can do is pray she doesn’t get the Gwen Stacy treatment with the Green Goblin running around.

Speaking of which, after Anna gives Otto his eureka moment with the face recognition software being the problem, we see on the television reporters hounding Jameson with questions to if the Green Goblin and Spider-Man are working together since he got rid of all the competition. Jameson denies it but takes a little trip to Alchemax to visit that little bastard Stone and Spider-Man 2099, Miguel O’Hara, to get his Spider-Slayers since he believes they are working together and Spider-Man must die. And he wants him to know it was him who was responsible.

Yeah, that’s going to end badly for everyone involved.

Spider-Man pays a little visit the guy who made the facial recognition software since he’s avoiding Otto as Peter and he learns about the Goblin Protocol and where the Goblin’s army can be found. So he goes underground to pay them a visit as Captain Watanabe pays Parker Industries a visit, as she wants him for questioning just as much as the rest of his employees. The Green Goblin is waiting and has him sit down for a little chat, revealing he knows he’s Otto wearing his skin by reading Carlie’s Journal.

Otto actually sits and listens to his proposal for an alliance to rule the city…right up until he said Otto was his second. When you have an ego as big as Otto’s, that gets you enraged and he declares himself Spider-Man and that he was going to rid the city of him. Green Goblin tries to fry him with lightning at that, but he reveals that it was the virtual projection made from the tech that Stunner used as he wasn’t stupid enough to go into enemy grounds on his own when he has an army and a brain.

Green Goblin then points out that he was still stupid enough to make his base of operations public and calls for his goblins to destroy Spider-Island, ending the issue.

Well, there was a lot going on in this issue and I must say I’m liking the intro into the final arc. The art was good, the plot was moving, overall it’s a must-have issue and gets a perfect 5 out of 5.

The latest entry in the newest iteration of the X-Factor series is out now and I’m here to review it, no strings attached and my personal opinions abound. So, let’s get straight into it.

First off, he left Polaris at her wedding for the nurse he was psychically dating while in a coma with the help of her mutant son. Second off, wasn’t he flirting to high-heaven with Wasp in Uncanny Avengers? They have a child together and are married in the upcoming arc, which I know will be retconned soon enough since Cap got disfigured by acid and Marvel can’t have that, but still. Now he claims he wants Quicksilver looking out for her because she’s his girlfriend and she’s nuts, and he uses these exact terms in the same page.

Quicksilver wisely points out that she has no reason to trust him well enough to serve as a mole and she tried to shoot him, but she was drunk and their whole family has issues like…well, every major character in these books. Wolverine kills his kids, the Summers brothers are currently on the opposite sides of the law and don’t get me started on their extended families, do I need to cover anymore? For that reason Havok’s claim that she’ll trust him because they’re blood rings hollow as hell. They wrap it up with Havok also being a deadbeat and Quicksilver saying everyone hates him, which he tends to bring on himself and I think Finesse likes him as a mentor.

We then skip to Serval, aka Google, and learn that Harrison Snow had implanted a nanotech camera in Polaris’ eye while she was sleeping so he sees what she sees. Yes, he violates her privacy like it was a Tuesday for him, but he’s big business. It was probably in her contract under the terms no one reads.  Anyway, he learns at that moment they’ve been hacked from the PR head and decides to give his new team a call.

Two members of the team, Polaris and Gambit, are in his new room in the building and playing with his cats that Mystique gave him when Iceman decided to freeze the world over after corralling his ex-girlfriends into a snow cave for their safety, his ice clones claim, in Astonishing X-Men…including Polaris. Anyway, one cat scratches her and she flips out and gets ready to deal with it violently until Gambit snaps her out of it. Okay, maybe she isn’t a paragon of good mental health but I refuse to say Havok was right.

Snow pops up then and takes them down to their server room, where the guy running the place reveals they are being hacked and he knows the location for their team to go deal with it. Gambit notes he’s screwed as the place is the headquarters of his Thieves’ Guild even though it doesn’t pop up on the map. So he and Polaris suit up as Quicksilver arrives (with Gambit correctly claiming he was updating the Avengers about them) and take their shiny new jet out for a spin after it beams them up.

Meanwhile Snow goes to confront last arc’s villain of the week, Hoffman, and recruits him after illegally detaining him. He still has his mutant powers, but his DNA reads human, so naturally the megacorp wants him to work for them. Hoffman signs up when he learns they get benefits, which A.I.M doesn’t I suppose. Must be because they keep getting blown up or attacked…

As the team arrives on location, Gambit come clean that he knows who’s responsible despite the fact that he’s not involved in this one. One of his members is Nil, a technomancer. He uses magic to control computers and such…really, magic for that?  Anyway, Nil confesses he was only able to get into Serval by using a new medium for his powers.

It’s Danger, who helped spring Cyclops from prison and hates being locked up and controlled more than anything. So naturally when Polaris springs her she’s too pissed to think about anything but killing everything. Cue fight next issue before she joins the team.

Okay, so while it isn’t an action-based issue it does move the plot along and reveals several key things while introducing a new team member. We learn that Serval is basically any big corporation in Marvel like Roxxon or Alchemax or Oscorp and we learn Quicksilver is a spy, but no real shocker there until his sister finds out and tries to kill him again.

So I’m giving it a 4 out of 5 because the art work still isn’t doing it for me and calling it a review.