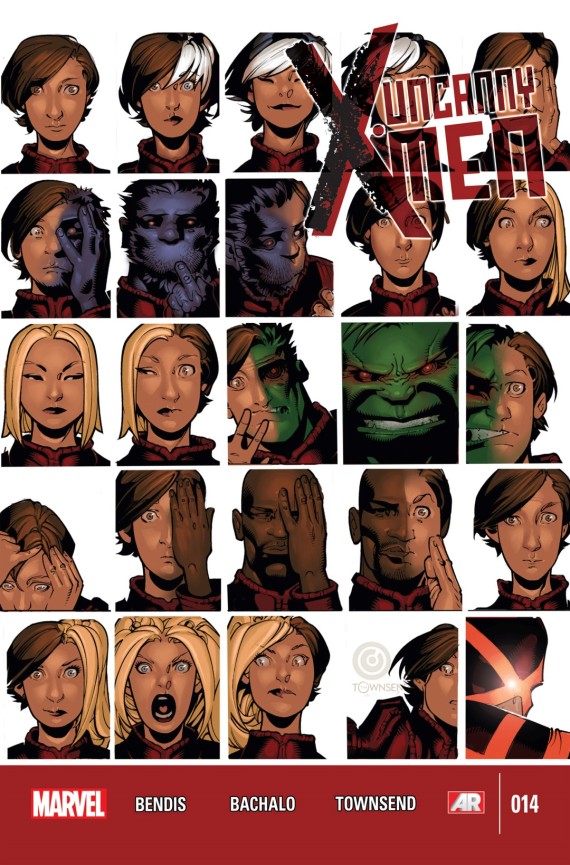 Time for Benjamin to become more than wallpaper.

Cyclops’ revolutionary team has an assortment of powers among their new recruits, but out of all of them the one who lacks any development to them or his power is Benjamin Deeds. He’s been wallpaper up to this point, useless in general. It’s time to change that and who better to do it than the only member of the team with a teaching degree, Emma Frost.

Issue #14 begins with a training session taking place after Battle of the Atom, but before the O5 X-Men and Kitty get there. It’s basically a requirement of the X-Men to be able to fight and endure, so having them climb a rocky mountain or hill or whatever in the rain is no surprise. Along the way they discuss how things are going to go down when the O5 get here, with Emma taking shots at Scott throughout the training session, when Benjamin is the last to reach the top and complains about it.

Cyclops, in a rather dickish but accurate move, points out he needs training more than the rest as his powers have no known combat usage. He then hits him and tells him to hit back, which he fails to do so and gets flipped and chewed out with the whole ‘You are not ready’ point. After a shower and an attempt at a pep talk by Triage, he returns to his room to find Emma there and dressed in something that I’d expect Magik to be wearing.

Emma doesn’t need telepathy to read his mind: His powers aren’t as openly awesome as the others, he doesn’t feel like he belongs,  he doesn’t know what to push for because he doesn’t know what he can offer. So she pressures him and notices that Benjamin’s powers are more than transformation, but has an effect that makes you feel good about everything as long as he’s around. Thus she decides to take him out for a night.

Magik joins the pair and takes them to Atlantic City, where she tells him to chat up a random girl. He says he’s gay, but I’m not sure he’s serious given that he seems to constantly stare at Magik’s ass. Either way, the attempt goes poorly and he’s forced to flee while Magik notes Emma is being more patient and she claims its Character Development.

In order to elude capture Benjamin tries again and this time he’s more successful, chatting up a girl and shifting his hair to match her own. Emma has him do it more while sending word to Cyclops and we get a montage of him bonding with a variety of people before she has Magik drag him to the Financial District to deliver a letter. He gets it done, but it nearly gets him arrested since she sent him into a SHIELD compound and had him deliver Cyclops’ declaration of war.

Note this type of place has very high security and he just walked up to the big brass. Assassination potential very high. Magik saves him and he gets a pat on the back from the big man himself, stating its time he got himself a Mutant Name.

Now, this issue was filler to me, but character development is always welcomed. At first I thought the guy was going to be another Mystique, which isn’t a bad thing, but he can be more. His ability screws over recording devices and charms people, in addition to a level of transformation. He’s an infiltration expert, a spy in the making, and thus useful.

Despite lacking the violence I love, it gets a 4 out of 5.

This entry was posted on November 20, 2013 by Born of Prayers. It was filed under Review and was tagged with Comic, Free, uncanny x-men, x-men.