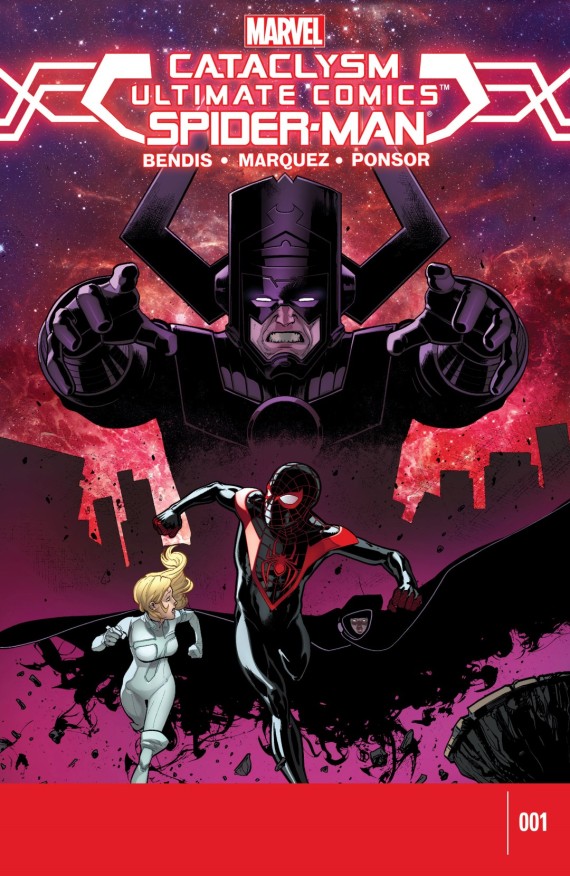 Well, the end is nigh in the Ultimate Universe. At least that’s what some people think anyway and I can’t blame them. As Galactus from the 616 Universe runs rampant on the extremely under-prepared world, I’ll be covering what’s happening in Miles’ corner of the event rather than the Ultimates’ Last Stand or the X-Men. With that said, let’s get into Cataclysm: Ultimate Comics Spider-Man #1, shall we?

It starts out with Jessica Drew asking if she was fired for the raid on Roxxon with the Ultimates, who just now learns she’s a clone of Peter Parker since it was apparently classified. Whoops. Captain America thinks she just did her job bringing in bad people doing bad things, while the director states that they had defense contracts with them and says this wasn’t her doing, but Nick Fury’s since she inherited it from him. The discussion comes full circle with Jessica wanting to lead an investigation into Roxxon.

We then skip to Miles sleeping in class, angering the teacher who asks him the usual question that he should only know the answer to if he wasn’t sleeping or she would call his father. He actually gets it right and saves himself. We then skip to Lana, who broke parole by using her powers  before she turned eighteen. She states she didn’t want to follow her mother’s footsteps but being a hero felt good, before she runs away from the parole office.

Back to Miles in costume, he ends up breaking up a fight when he gets hit by a beer bottle. Apparently people doubted it was him, claiming the costume was still in bad taste until he webs up the entrance. Webs are the ultimate proof. The police show up and actually hugs him, claiming it was good to have him back. Miles is as confused as we are since the last time he saw them they were shooting at him, but I guess a year off the clock made them fond of the costume.

Tandy and Tyrone are alone in the meantime, with him telling her that their parents gave up on them. She insists he takes her home, where they discover that it was abandoned. Heartbroken, and with no where else to go, we have another case of them discovering that heroics feels good and wondering how they go full time. It’s then that Galactus shows up and the issue ends.

Okay, so great art as usual. That goes without saying, and the plot is moving along nicely.

We’ve learned a bit more about Lana since her absence from the series, namely that she was on a super-power parole and she wasn’t raised to know that being good feels good. Given her mother’s lengthy jail sentence prior to her birth and after it should come as no surprise. And she’s cleaned up her language a lot.

Tandy and Tyrone have come to terms with the fact that their parents abandoned them, at least at the moment, and have decided to make the hero thing a part of their life. Great timing, since the end of the world is upon them. Here’s hoping for the best.

This entry was posted on November 13, 2013 by Born of Prayers. It was filed under Review and was tagged with Comic, marvel, review, spider-man, spiderman, ultimate-spiderman.