Fanfics I have wrote that have been updated:

Harry Potter and the Path of Indifference #7-8

Summary: Harry Potter may be the brother of the Boy-Who-Lived and his parents may still be alive, but that doesn’t mean everything is perfect. While he may not want anything to do with the upcoming war between Light and Dark, he’ll end up walking between them. An AU fanfic involving Harry Potter as a Ravenclaw and based off Neither Light nor Dark: Steelclaws & Gray Coats.

Summary: Being Spider-Man cost him his uncle, mother, and crippled his father, leaving Miles a broken young man still putting together the pieces. But the city needs him, so he reluctantly dons the mask for a second time, and join hands with a few others to become what the city needed, but not without a price as they would learn in their journey to be heroes.

Fanfics that I have found interesting and have recently been updated:

Harry Potter and the Puppet of Time #17

Summary: Time travel. It’s always about Potter. Draco Malfoy doesn’t like that fact, but there is no one else who has the power to change the world. Sending his memories to his younger self he hopes to create a better future. Intelligent Grey Draco. No slash.

Summary: The series is a retelling of Harry Potter books with the titular character, alongside two other ones readers didn’t really care about, being replaced by three characters (Emiya Shirou, now known as Shirou von Einzbern; Aozaki Takara, with her name unchanged; Jester, with his name becoming Galen Salvatore) from one of his earlier works. With Neville Longbottom being the one of whom the prophecy speaks after Harry Potter’s death at the hands of Lord Voldemort, they are trying to fix what is left of the world they knew from books and movies, to have a place to live.

Summary: Before the start of fifth year, Dumbledore changes the plans. Unfortunately he didn’t bother to inform Harry. At his trial, Harry realises that it is down to him to save his own skin. To do so, his Slytherin side must come out to play, and once it’s out, it sticks around. Now Dumbledore and the Ministry alike must watch their backs…

Summary: For centuries the Holy Grail War has operated in secret with no outside interferance, using the spirits of ancient heroes as Servants. Now a new definition of the word Hero enters the Grail War and will bring great change to everything. No Slash.

Summary: Being ignored and gazed at with hatred can lead someone to become a boisterous and loud orange-wearing shinobi, but it can also drive him to become a silent and invisible introvert. Of the two, Naruto takes the logical choice for a future in the Ninja World. Team Sai-Naruto-Sakura. No pairings. Future of bloodshed and grittiness assured.

Summary: Lelouch had been quite happy with his life. Sure they were living in obscurity, but he and Nunnally were safe. All of that changes however, when his identity is revealed and Lelouch is forced back into the fold of the Imperial family.

Summary: Sometimes, the tiniest of changes can have the greatest impact on the world. One chance encounter goes in a new direction, and the course of the Holy Grail War is irrevocably changed…

Summary: Emiya Kiritsugu was happy living the rest of his short days. He had put his past behind him… until he began to dream of futures that had yet to be. Let it be known that the Magus Killer was not dangerous simply because he was dying and had no plans to fight.

It’s been a long time coming, but the 28th issue of Miles’ story is out for us to enjoy.

It begins with Mr. Roxxon being alerted by his security team that they’re about to have a little problem. Said little problem is about five superpowered individuals who have a bone to pick up with him. Just as well, he tells them to get his Brain Trust and asks them on whose authority they are arresting them under, revealing he knows all of their identities and insults Miles by bringing up his mother and the boy has to be restrained by Jessica.

This douche is so damn confident that they can’t touch him he goes onto to say that they should be thanking him for their gifts, cue pissing off Dagger who takes out his guards. Jessica then tells him to cool it before she sics the kids on him, but the asshole goes around claiming she’s fake and he created her in a petri-dish. At this point Miles decides to do a Batman Interrogation and tosses his ass out of the the window and webs him up by his feet.

Roxxon goes on a rant revealing that he was the one who hired Prowler to break into Ozcorp and ended up creating the next Spider-Man. He also reveals that he discovered his identity in three days and knows about Miles’ father’s past. He talks so much shit that when the police get there he thinks he untouchable, but Jessica has her contacts with SHIELD make the NYPD leave. Bombshell is impressed and they’re about to leave with the douche when the Brain Trust shows up.

Doctor Miller has some device that cripples the rest, but Miles webs the device out of her grasp and kicks her in the face. Dagger approves. Then the goblin wannabe hulks out, but Cloak takes care of him. Then they beat on the rest and SHIELD shows up, which is when they split after talking about doing this more. Miles then goes back to Vision Academy and makes up with Ganke and then goes to see his father.

The issue then ends with Jessica having a talk with Monica Chang about the kids. What can I say, I like how this ended and the arc itself ends on a decent note. Once again, perfect score all around!

Edit: Also, I updated my Fanfic for the  series here. 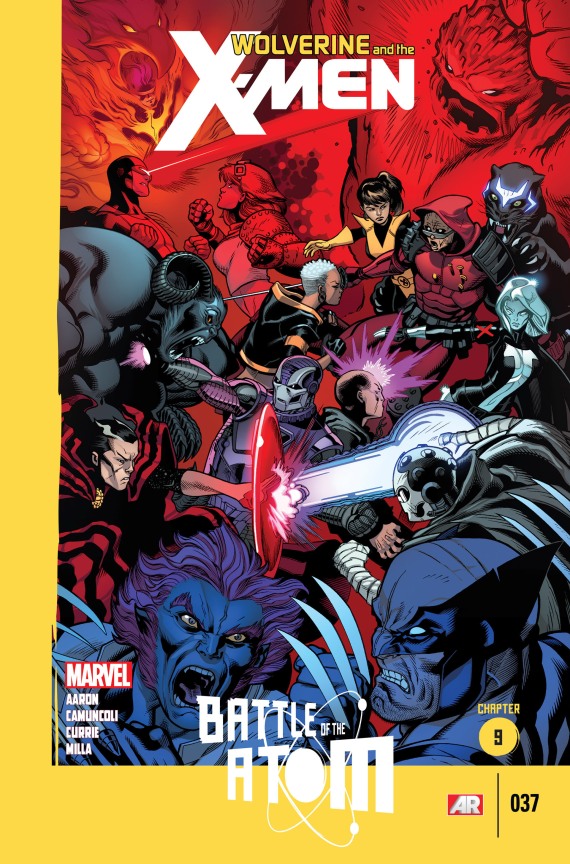 The chapter where everyone fights.

Okay, so issue #9 of Battle of the Atom is out and here’s the subsequent review.

It begins after Cyclops popped into the room with X-Men aplenty in tow, only to end up in a white room in his mind and face-to-face with Xorna Jean. Being Cyclops and her being a telepath and Jean, what happens next is expected. She kisses him and he notes she’s not his Jean because she’s a better kisser. Oh Cyclops, really…

Snapping back to reality we learn Xorna Jean and her Brotherhood left during that time frame. Emma calls Cyclops out on Jean being in his head, but she no longer has an all-access pass so I can add that up to jealousy, while Future Phoenix warns him not to let her get in his head again since he has no idea what she’s capable of. Cyclops tries to order them to start tracking the Brotherhood down when not-dead Wolverine shows up because Wiccan saved his ass.

He also swears off sex since he got gutted by his son with Mystique (which is going to be hell to explain when Kurt comes back) but considering Storm is his current partner I doubt that’s happening.

After the usual meet and greet and blame-game, with tantalizing hints that something won’t let the O5 go back and yet no answer because Kymera reports Deadpool is dead, we skip to the Brotherhood. They can’t do what they set out to do, and Future Xavier ends up paralyzed like his grandfather, so Future Beast has decided to skip to Plan B. Teen Jean once again remains vague on what she saw, because the writers keep dragging the mystery out, and they land at Cape Citadel and start raising hell.

This naturally gets the attention of SHIELD and Maria Hill, who really should have taken that vacation Cyclops had Magik send her on. Back at the school Future Phoenix is trolling his younger counterpart  and Wolverine is being a hypocrite when they get the message too. Thus begins a battle royale where we have everyone throwing down.

It is revealed that Ice Hulk is basically an Ice Clone that gained a little sentience and serves Xorna Jean that they can’t reabsorb, Kymera is Storm’s daughter, and Magik finds her badass future brother awesome. Eventually the fighting stops when SHIELD arrives and Dazzler (Mystique) is antagonizing Maria into launching the tear gas while she borders on another breakdown. Xorna Jean then has all the Helicarriers fire missiles on the gathering of mutants and then snaps a witty line as the issue ends.Now, unless those missiles reveal that they’ve been building Sentinels somewhere on that base, I can’t find any logic in what they were planning on doing here. More than anything I’m tired of the damn subterfuge. Can we get some straight answers for once, it’s not like the future is going to remain the same once they go back.