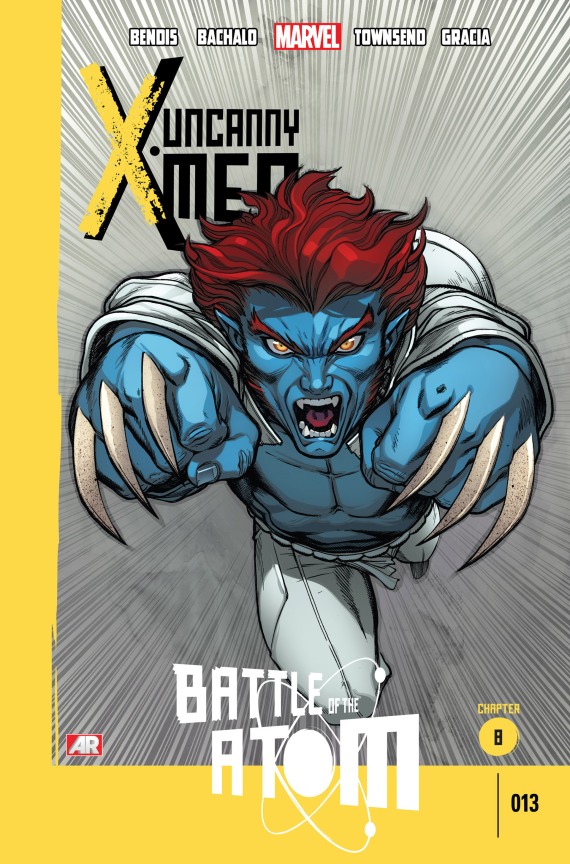 Okay, so issue #8 of Battle of the Atom is out now and so is my review. I’m not going to lie, this issue could have been better, but you’re going to have to read to find out.

It begins with Cyclops’ team getting ready to march, only to realize that Young Bobby and Hank are gone with Psylocke. They didn’t even waste panels showing that they already lost the two they were supposed to protect, which probably would have made it better to keep them at the base with the other students they left behind. After that they get a tower dropped on them, so bad opening move for our heroes.

Raze, the abomination of Wolverine and Mystique, was imitating Psylocke and captured the two. With their prizes in hand, they leave Ice Hulk to hold off Cyclops’ team, who were saved by Wiccan. Cyclops has Magik and her future-brother teleport inside, while Phoenix Quentin melts the ice giant,  only for the Russian siblings to find Molly and Deadpool waiting inside. There’s some bad blood between the pairs, with Molly disillusioned and vengeful towards the X-Men and Deadpool referencing that Magik unleashes something bad onto the world.

Ultimately it ends when Magik teleports Deadpool outside about a hundred feet up and lets him fall while she stabs Molly in the back with her Soulsword. That’s how quickly a fight with a teleporter is supposed to end. We then go back to Cyclops’ team, who have encountered Teen Xavier. Wiccan offers them some magical protection while Magneto claims his helmet can protect him (which it didn’t on Utopia from Jean), but Xavier just has Krakoa eat them all, which is the third time on Cyclops’ end.

Xavier (and somehow the unmelted Ice Hulk) reports in as Deadpool hits the ground and apparently dies and they decide to flip the switch to send the O5 back. Magik arrives to stop them, only to be telekinetically restrained by Xorna Jean while the other team tries to escape Krakoa and are hurting it from the inside. Yeah, apparently whatever Magik does makes everyone hate her because they all try to kill her, between Raze offering to gut her and Xorna Jean trying to make her kill herself like she did in their timeline. Eventually she teleports herself out while Future Colossus shanks Xavier with his Soulsword.

Here’s the stupid part though, they try to send the O5 X-Men back but they won’t go. Testing the machine with Raze indicates that it won’t work for just them, with old Hank stating that in theory they caused so much mayhem with the time stream they can’t go back through the time cube as Cyclops’ team arrived.

This issue just single-handedly rendered the entire event, issues that could have been spent on progressing the individual series’ stories, meaningless. Bad enough they have Molly playing for the bad guys, they wasted my time if there was no real threat of them going back. The 616 universe can’t be sustained if you take important characters from the past like that, look at what happened when Wolverine killed Hank Pym in Age of Ultron!

I could handle the plot holes when it came to things like psychic protection and the stupidity of certain characters, but this was too damn much. The heroes didn’t even win or make it in time, it’s a fucking cop-out that the O5 remain! They have made it that, short of sending clones of the O5 into the past or Magik teleporting them back to that time period or Eva Bell when she learns what she’s doing, the O5 are freaking immortal because if one snuffs it the timeline will snap.

They’re going to have to retcon or asspull an excuse to explain away this. The one who pinned this story was an idiot and so were the dunderheads that wasted the X-Men’s fifth year publication like this. Smooth move Marvel.

This entry was posted on October 16, 2013 by Born of Prayers. It was filed under Review and was tagged with battle of the atom, Comic, Free, marvel, uncanny x-men, x-men.