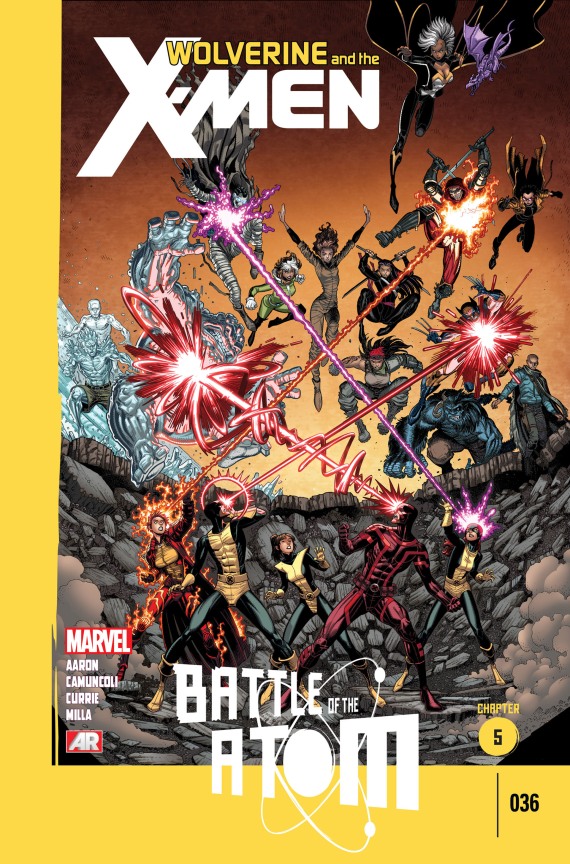 I don’t know what’s more amazing, I’m getting some decent views for my reviews or the fact that I’ve been doing this for a month consistently. The only way to find out is to keep going, and today that involves Battle of the Atom #5 of 10.

The issue picks up with everyone recovering from Xorn Jean mentally freezing them, including Magneto apparently, as she does battle with four other psychics. Now, once again, considering that it was stated that Cyclops, Magik, and Magneto had some psychic protection in All-New X-Men #10 or #11, the least the writers could do was have Magneto take off the damn helmet and Scott take off his mask before it happened. Yeesh.

Young Cyclops wants to help his girlfriend, like a good boyfriend should, but his older self states they have their own fight as Wolverine comes in talking about how he’s getting kids involved, again, which led to Schism in the first place. Please note that Wolverine has no right to talk as his school is possibly one of the most dangerous places on Earth, especially after taking in some of the Hellfire Club brats, and that trip to the Savage Lands was less than peaceful. Young Cyclops blasts him to save us the trouble and Storm tries to play commander, ordering both sides to stand down and painting Scott as the villain, which he calls her out on since she brought the ones causing the conflict here.

Xorn Jean meanwhile manhandles Irma psychically, angering Emma even more than simply being an adult Jean Grey entails, and they quickly go into trash-talking. Being the object of Scott’s affection and their ages are brought up as well, which was due, making it seem like a petty squabble between two women rather than the fate of the future. But, even with Young Jean and two remaining Stepford Sisters, it isn’t enough and Emma gets taken down, with her daughters.

Rachel, Kitty, and Older Kitty arrive, but because her powers are being dampened by Xavier Rachel can do nothing about the psychic battle while Kitty says she hates her older self. Oh yeah, she’s defecting after this event is over. Then, when Young Cyclops tries to help he gets attacked by Ice Hulk and once again the hypocrites speak of stopping the fight with kids present while the future X-men says a couple of bruised kids is worth it to get the original five home and the Cyclops pair decide to settle this the old fashion way–by blasting them.

Oh, and Deadpool says Goldballs is a legend. If I could trust him, this would be awesome.

Magik meanwhile shows up at the Jean Grey School and picks up Young Iceman and Beast for a little field trip to the future. Magik has been once, but she feels the future X-Men are lying in her very bones thanks to being demonic or something and, since all of them have their doubts about who these future X-Men say they are, naturally the only way to get some answers is to go check on the future yourself.

On Utopia, Young Jean wins against her older self and sees something that make her shocked to her core. Personally, I think that fight was fixed and Xorn Jean showed her what she wanted to. At the same time Deadpool gives a speech saying that things were so bad in the future they made him a part of the X-Men, which shouldn’t be so bad considering he was the heart of X-Force, but Young Jean backs him up and says its time to pack it in and leave.

Older Cyclops doesn’t want to let it go, but Magneto points out if its a pretty girl with red hair involved he should always be questioned. For examples see Rachel, Jean, Hope, Madelyn, and so on. Wolverine thanks Deadpool, but Deadpool mentions that it was all a lie under his breath.

Yeah, at this point we can safely assume they aren’t as kosher as we were led to believe. You know, if you ignored the evil faces Xavier kept making. But to compound at the end it Magik arrives with her two passengers in the future, at their school with freaking sentinels that act polite and a bunch of future X-Men…including Kid Omega hopped up on the Phoenix, Gandalf Iceman, Mustache Bar Colossus, and Iron Man?

I’m not going to lie, it was only half the series in and I could tell that these X-Men were playing some kind of second agenda.

I’m not saying they are evil, yet, but it seems like they’ve got their own goals and are lying to their past selves. Look at how they popped up when they were already getting ready to send the rest back and how they resorted to violence so suddenly. I’m more saddened by the fact that future Molly may be a bad guy than anything, but I’m reserving judgement until we get the full story at the end.