Just flushing out some facts:

* The next chapter of Lightning and Wind is out! You know where to look! ^_^

* Bleedman Updated Grim Tales from down below

* Working on a new story for magazine subscription

* Arcane Advent Vol.2 New Edition should be ready for release in November, but I make no promises 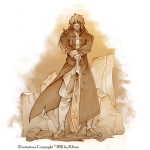 The Arcane Advent site has been updated once again at: http://www.Arcane-Advent.com

And the book is on sale at 15% off, along with another 20% off using the code BURIED at Lulu.com until Oct 28th. Don’t miss out on it.

Lightning and Wind Chapter 4 is out

Alright, this will probably be the last chapter for this month. Enjoy and comment on any questions, concerns, etc.

As a freelance writer and programmer, I’ve been busy working on other people’s works and haven’t had much time to get back at writing my own stories and games. When I do get some free time, whether I write or not depends on if I have an internet connection. As I’m sure I’ve stated before, I have a very short attention span and the internet doesn’t help since I get distracted easily.

Hence the reason for the massive delays.

Anyway, I’m hoping to get another chapter of Lightning and Wind out soon. I do plan on hosting it on fanfiction.net eventually. I just want all the chapters done first. Expect the representative from Neccessarius to appear in the next chapter.
Also, I’m planning out a short story after getting an idea from a wonderful Dresden Files fanfiction about Selkies called Fair Vote. I recommend it highly for a good read. It starts off slow with impersonating a cop, and Miami politics, but the story is decent.

My story will have a different theme to it, but hopefully it will get published…unless there’s too many words.

Alright, a new chapter of Lightning and Wind is out now: Here

Okay, I’m still working on my writings, but apparently I’ve been out of the loop too long to not have noticed the new Final Fantasy Trailers:

With so many distractions, my writings going to slow down even more.